Scott will never let me forget that I destroyed his ten year old work league. 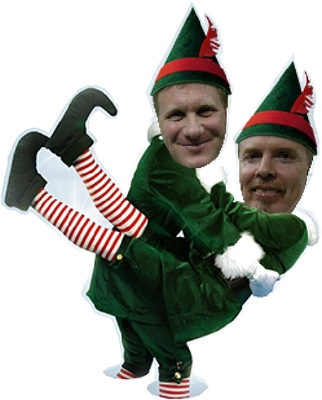 I woke up to this bulletin from the fantasy football board from Scott’s boss.

Posted by Sxxx, to Everyone
Dec 08, 11:21 pm ET Congratulations to the 4 playoff teams, It should be wide open,with each team playing well. It has been a fun season and I hope everyone has had a good time playing.Also a reminder to anyone that has not paid the $5.00 entry please do it asap. Thanks

???  Entry fee?  I asked Scott point blank at the beginning of the season if we were playing for money, and he said no, and I have proof that I had no idea in this bulletin I made on Dec. 1st begging off with a list of reasons why *I* (really Scott) threw the playoffs, see # 9.  The kitchen remark in # 6 was in reference to one of the guys saying the women should get back into the kitchen.  Moonknight of # 7 is the other woman in the league who jeered all the guys.  Zilla, of course, is ‘Satan’ at the very top of the league that everyone wants very badly to beat.  And # 3 pretty much says it all, if anyone is keen enough to pick up on Scott getting into my team behind my back.

2- Zilla jinxed me with his voodoo doll because I ‘elfed’ him.

3- Quack Attackers presumed to give me guidance I felt intuitively against.

4- I’m really in love with someone else in the league and got distracted.

5- Someone paid me to throw the game.

6- I was conducting an experiment that exploded in the kitchen.

7- I’m using moonknight as a human shield for my next move.

8- I was blinded by puke and testosterone, both of which make great movies.

9- We aren’t playing for real money, so I don’t care. Unless Quack lied to me and was going to take all my winnings…

10- My real team leader is sitting out in a henhouse in subzero arctic blast weather and is glad you all ate turkeys and not chickens. Well, I actually ate a stuffed cornish hen… Which leaves us to wonder- who is the real turkey here?

So I texted Scott at work…  He tried telling me that he *had* told me about the entry fee, and I quoted my bulletin with the date and time stamp, and I guess he decided he’d better back down because a little red flag was going off somewhere in his brain that this is a huge PMS time for me and he’d already been caught red handed getting into my team and totally screwed my last two games, effectively knocking me from 2nd to 5th in the power standings and right out of the playoffs.  So HE screwed HIMSELF out of the winnings, which he wasn’t telling me about, and all that nervous pacing and whatnot wasn’t because he cared about ME actually playing well all season.  He considered my team his by proxy from the very start.  What pisses me off is that I never saw it coming, I really did trust him, and I really did believe he cared that I was having a good time playing fantasy football.

He was smart enough to say he was sorry and he loves me before he hung up, so I didn’t reach through the phone and yank his eyelids off.  But I think we’re pretty clear now that I will never trust him to know one of my passwords again.

Ok, that was a bad year. My team was awesome, my own husband sideswiped me with sabotage out of nerves and the rest is lost in him not admitting he kept secrets from me. I found out a couple of years ago that he sometimes takes some pretty sweet winnings, no wonder he paces around obsessing over all his teams. The next year (2009) I was 3-0 when my mom died, everything crashed after that, and my hostility reached the ‘nasty’ level. As hard as I tried to just be silly and smack talk, Scott says I got so scary that the league disbanded and never came back. Since the commish of ten years was fondly called ‘Satan’, you can imagine the quaking fear rippling through the league when even Satan got quiet. They experessly forbade me from ever joining their MLB league, like I give a crap about baseball.

Football is a HUGE thing in our house. I used to wear a Bears sweatshirt over to Scott’s mom’s house when she was a cheesehead and everything in her house was green and gold. I didn’t really care about the Bears, but she hated them, so it was funny to sit there being quietly annoying. We made peace only when Favre jumped ship to the Purple People Eaters.

So. I’m doing fantasy football again. I took second place last year (790) and managed not to alienate the entire league because I kept my mouth shut. Guess who the Flying Monkeys are- that’s right, Scott.

Anything football always winds up him against me. You should have seen us during the draft last night, set up in the same room, him at the desk, me at a card table, twitchy and gleefully hand rubbing and smack talking almost nonstop. The rest of the league is like a game board set up for Scott and I to do everlasting battle with each other.

Marking my calendar, Super Bowl is on Groundhog Day this year and kickoff is scheduled for 5:30 pm my time, which is central/Chicago time. This picture clicks to a vacation package if you want to check it out. I’m not being being paid to link it, just wishful thinking.

We’ve already got a rack of ribs in the freezer. I might make a coconut pie because that’s the only time all year I make one for some reason, no idea why. I need to make sure Scott has a little pint of Dulce de Leche Haagen-Dazs ice cream tucked in the back of the freezer where he can’t find it before then, Orville Redenbacher’s Movie Theater Butter microwave popcorn on hand, and hopefully some halfway healthy and nutritious finger foods like tortilla chips and salsa. I made the mistake of fixing up a big breakfast last Super Bowl and Scott wound up snacking on junk the rest of the day instead of a good meal later in the afternoon. I’d love to be able to order pizza because the commercials make me drool, but we live too far out of town. Might pick up something fun like premade jalapeno poppers from a deli case.

I usually never care which teams make it to the Super Bowl because for me it’s all about the party. I went through my first Super Bowl live tweet last year AND. IT. WAS. AWESOME. You can still find stashes of fun a few people had the wits to save, like Funniest Super Bowl power outage tweets, and then of course there was real time marketing and fan reaction like Super Bowl blackout quickly spawns social ads & parody Twitter accounts and That was quick: @ SuperBowlLights debuts Twitter account (which I followed immediately). I really love the real time interaction between fans, celebrities, advertisers, and sports industry staff, it’s like the world becomes one big warm fuzzy hug and you’re not just watching a game on TV anymore, you’re PART of something happening across the entire nation and even around the world. Especially when you can tweet HEY, I HAVE OREOS! when you see something like this happen. How Oreo Culture-Jacked The Super Bowl

In the olden days I would go to Super Bowl parties at my mil’s house and wear my Chicago Bears sweatshirt just to be annoying, because she was a hard core Packers fan. Everything in her house was green. That all changed when her golden boy Brett Favre went to the Vikings, which kinda killed the fun because Scott’s a Vikings fan too and I couldn’t be annoying any more. If I had the money I’d buy one of every team’s colors and walk around annoying people all day long everywhere I go. I was in a grocery store one day in my Vikes tee and the bread guy restocking shelves out of his van nagged me about how bad the Vikes were sucking, which I thought was hilarious. More strangers talk to me when I’m wearing football t-shirts than any other kind of t-shirt I wear, including scifi shows. I like it. And it gives me license to give crap back without actually causing trubba, because it’s expected.

Ok, I’ll talk actual football for 5 seconds. I really miss Moss and Culpepper together. Randy Moss is the most beautiful thing that’s ever run around a football field.

All right, enough of that. Super Bowl is ultimately about the commercials moving big money around. Every year around this time I dig up my fave ever commercials and post them somewhere, not necessarily Super Bowl ads. Sorta like psyching up, pre-party.

There are over 20 Geico Caveman commercials, and I don’t think any of the compilations on youtube are complete, but here is one that comes close.

This list could go on for miles, and I’m sure there are people out there worse than me for combing through funny commercials on youtube, so here is the last one, and it cracks me up the most.